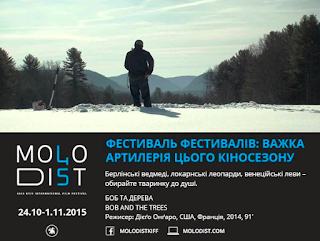 "Festival of Festivals” is a traditional Molodist program, which includes this year’s prize winners at the biggest festivals in the world" The program will open with “Dheepan” by the cult French director Jacques Audiard - winner of the “Golden Palm” at this year’s Cannes Film Festival. "
“Aferim!” by Radu Jude won in the category “Best Director” at this year’s Berlinale.
“Me and Earl and the Dying Girl” by Alfonso Gomez-Rejon (USA), winner of the Grand Jury Prize and the Audience Award at the Sundance International Film Festival.
“Bob and the Trees” by Diego Ongaro received the Grand Prix at the Karlovy Vary International Film Festival.
“Mustang” by Deniz Gamze Ergüven was presented in the “Directors forthnight” at the Cannes Film Festival, where it received aEuropa Cinemas Label Award.
The second feature film by Rúnar Rúnarsson “Sparrows” graces this year’s “Festival of Festivals” as a winner of the San Sebastian Festival. Some time ago Rúnarsson debuted at Molodist with his film “Volcano”.
More info
Posted by G.I at 3:03 PM